On 21st November 1918 the Qualification of Women Act passed in Law, allowing women to stand in Parliamentary elections. The Act stated simply that women were no longer barred by sex or marriage from sitting or voting as members of the House of Commons.

In the last 100 years, only 491 women have gained seats at Westminster, compared to 4,503 men. There is still obviously a huge amount of work to be done. Overall 32% of MPs are women but there are significant variations between parties. For Labour the figure is 45%, and 21% for the Conservatives. 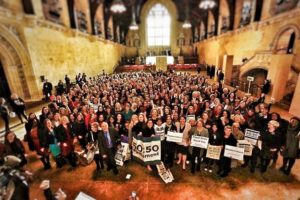 To mark the centenary and as part of the #AskHertoStand campaign, 50:50 Parliament, The Fawcett Society, the Jo Cox Foundation and Centenary Action Group hosted a series of events in Parliament yesterday and encouraged all MP’s to invite women to take part. Our Branch Equality Officer Sarah spent the day in Parliament at the request of her MP Tom Watson, joining over 300 women from all across the UK to celebrate.

“Starting the day attending the Women & Equalities Select Committee I listened to questions and answers about the barriers women face when seeking to enter politics. I found it very interesting that the same discussion could have been held about women and leadership roles anywhere in the UK. Caring commitments, cost implications, cultural issues & negative experiences when putting themselves forward listed as some barriers for women.

I had the privilege to attend PMQ’s, and as expected the main topic of debate was Brexit. 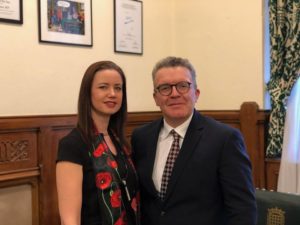 Following PMQ’s I spent time with my MP, discussing the event, local issues as well as wider topics affecting women including our #BleedingInsane Period Poverty campaign. 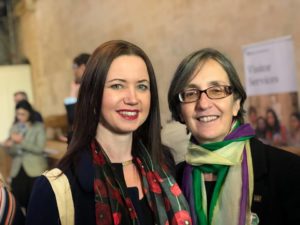 d how they got involved in politics and had the opportunity to spend time talking to Dr Helen Pankhurst, the Great-Grandaughter of Suffragette leader Emmeline Pankhurst.

I started the day not knowing what to expect and left with many thoughts about barriers facing women. We need to be the change we want to see. Prof. Sarah Childs stated Parliament needs to look more like workplaces up and down the UK. However this can only happen if Parliament becomes more representative of the population and we need to get involved at all levels. Politics affects our everyday lives, things will not change if we do not challenge the narrative”

I left with the words of Mandu Reid ringing true, ‘If you can not give a good reason as to why you should not go forward for any leadership role, then you have no reason and I ask you ALL to stand’ 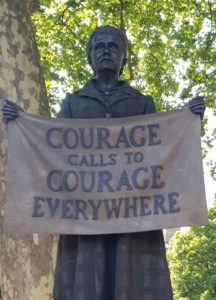 If you are interested in finding out more about how to get involved, please visit GMB Politics website, contact us at branch office or Cerys Way, Regional Political Officer on 0121 550 4888