Our women’s group BOSS: Birmingham Organised Sister Society along with the GMB Book Club invite you to a night at the movies.

The first of many films that will be played is Pride! Based on the true story of U.K. gay activists who worked to help miners during their lengthy strike of the National Union of Mineworkers in the summer of 1984. 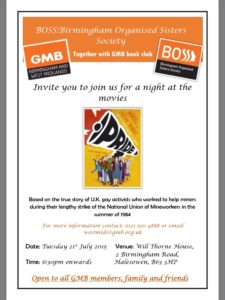