GMB Sandwell recently informed members that our equality officer Sarah James,  was holding discussions with the council regarding the TUC’s Dying to Work campaign.

Following further talks between our branch secretary Darren James, GMB Regional Officer Gill Whittaker and the acting Leader of Sandwell Council, Cllr Steve Eling, we are delighted to announce that at a cabinet meeting today (18th May 2016) the campaign was officially endorsed,  this means that the council has voluntarily endorsed the protection of our members during the worst time of their lives and to help fight for a change in the law to protect those who are terminally ill.

Not only is this a step in the right direction for the campaign but is a huge boost for our members as Sandwell is the first local authority to commit to signing the voluntary charter and the official signing will take place in the very near future. The council will also be adding further support initiatives to assist employees.

Cllr Paul Sandars said today “I am very happy and proud, Sandwell Council is a beacon to all other Local Authorities of how its people should be treated”

For more information about the campaign or if you are affected, please speak to your local rep, branch office or visit www.dyingtowork.co.uk 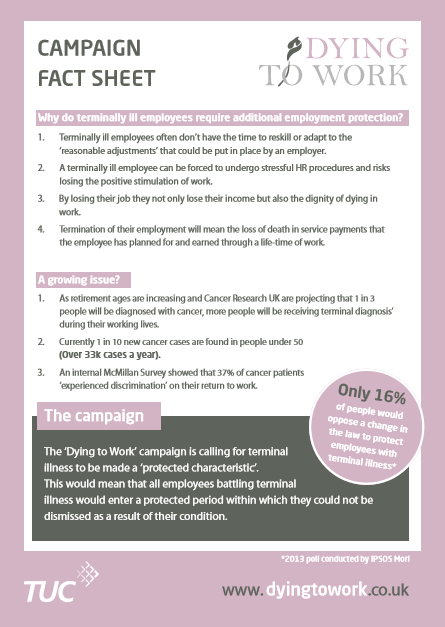