Throughout the GMB pay pinch campaign www.paypinch.org the GMB has been clear that local government workers are suffering the worst squeeze on their pay in living memory, and that the years of pay pinching by government must be brought to an end with decent pay rises.

Today (Friday 8th Dec 2017) GMB officers and members thanked Sandwell Councillors and Local Labour MP’s, Tom Watson and John Spellar for supporting our campaign and calling for an end to the Public Sector Pay Cap, whilst all took the time to send the Maybot Muggers a clear message – It’s time to end the cap and properly fund the pay offer put to the joint Trade Unions earlier this week. 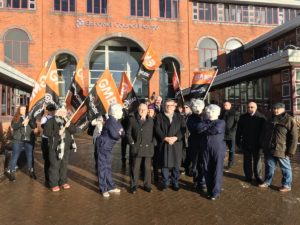 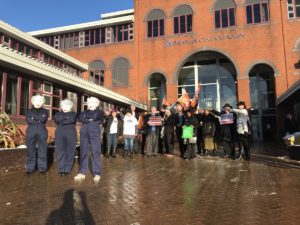 Go away Theresa May!

Details of the offer

GMB and the other unions representing workers in local government have received a pay offer from the National Employers for Local Government Services, who negotiate pay on behalf of 350 local authorities in England, Wales and Northern Ireland.

The pay offer stands to affect over 1 million workers. Local government staff have been offered a two-year pay increase from 1 April 2018. The local government pay offer has three key features:

Full details of the pay offer will be presented to all GMB members across Local Government so GMB members can have a say on their pay.
To make sure your voice is heard, join GMB online today