Yesterday (6th February) we marked the centenary of the first women winning the right to vote after the Representation of the People Act 1918 received Royal Assent. This was a huge milestone in the suffrage movement and for all future generations of women in the UK.

However, it was only for those women over 30, University graduates or property owners – around 8.5 million women. Celebrations were also quite muted as Britain was still fighting in WWI and not all women had received the vote – that would come in 1928.

100 years on the fight for equality still goes on, albeit in a different form.

We still see more women on zero hour contracts, suffering the impacts of insecure work and enduring widespread sexual harassment from Westminster to workplaces across the UK.

“A hundred years ago some women – those who owned property and were over 30 – successfully fought for the right to vote.

“But just like today there were too many women, too many working class women, left wanting.

”It is of course right that we celebrate the giants of the shoulders which we now stand on; so today we should remember and celebrate the women we owe so much to.

“Women like Emmeline Pankhurst, Emily Davidson and Flora Drummond but also women like Muriel Matters who was the first woman to ever ‘speak’ in Parliament during a protest that saw her chain herself to the grille that blocked out women’s faces and voices from the gallery of the Commons.

“But as we see more women on zero hour contracts, suffering the impacts of insecure work and enduring widespread sexual harassment from Westminster to workplaces across the UK, we must recognise that the fight maybe different thanks to the brave women before us, but the fight for true equality is far from over.” 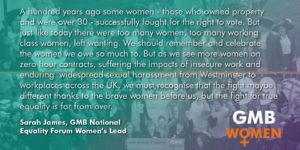 You can read more about the Suffragette’s fight through a research project undertaken by Sarah last year.