People under 25 don’t get a discount on rent, shopping or bus fares – so why should they be paid less? 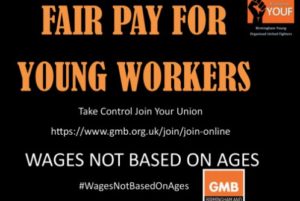 GMB’s young members are spreading the word about equal pay for under-25s in honour of International Youth Day. The group are meeting at 4pm on Birmingham’s famous Broad Street, where they will target pubs, clubs and hotels, where young workers are vulnerable to being paid the National Minimum Wage, rather than the Real Living Wage (currently £8.45 an hour). [1]
The young members have designed their own post card to give out for young workers to send to their MPs.
The campaign coincides with International Youth Day – an event celebrating the efforts of the world’s young people. [2]

“People under 25 don’t get a discount on their rent, their shopping or their bus fares.
“In fact, they often have to pay higher rents due to cuts on housing benefit for young people as well as extortionate motor insurance prices”
“So why should they be paid less?
“Young people working in pubs, bars and restaurants are particularly likely to suffer from poverty pay.
“That’s why on Saturday – International Youth Day – GMB will be hitting Broad Street to spread the word about equal pay for young people.”
ENDS
Contact: GMB Press Office on 07958 156846 or at press.office@gmb.org.uk
Notes to editors:
[1] https://www.livingwage.org.uk/what-is-the-living-wage
[2] http://www.un.org/en/events/youthday/