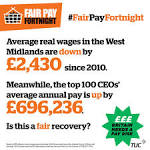 Average pay in the West Midlands fell by over £1,000 in real terms last year, according to new analysis published by the TUC this week to mark the beginning of Fair Pay Fortnight which runs from the 16 February to March 1.

This means that the average full-time employee wage in the West Midlands has fallen in real terms by £2,430 since 2010 – over £45 a week.

The TUC says that UK workers have endured the longest real wage squeeze since records began in the 1850s and that even with inflation falling sharply in recent months at current rates of progress it will still take years for wages to recover to their pre-recession levels.

While average pay for workers in the West Midlands fell by 8.9 per cent in real terms between 2010 and 2014, pay for FTSE 100 bosses shot up by 26 per cent over the same period, says the TUC.

The TUC estimates that it took a FTSE 100 CEO less than two working days, on average, to earn what most full-time workers in the region earn in a year.

TUC Midlands Regional Secretary Lee Barron: “Despite growth returning, 2014 was another miserable year for living standards in the West Midlands with real wages falling by over £1,000 in real terms.

“Even though inflation has fallen sharply in recent months, it is still going to take years for people’s earnings just to recover to their pre-recession levels.

“It is a different story though for those at the top. Senior City executives have seen a huge boost in their fortunes since the election as their wages have skyrocketed.

The TUC has organised Fair Pay Fortnight to raise awareness about pay inequality and to campaign for a higher minimum wage, greater extension of the living wage and higher pay settlements in the public and private sector.

A number of events and activities have been planned across the West Midlands during the Fortnight.

These include street stalls in Brierley Hill, Halesowen, Worcester and Coventry; Living Wage actions with Birmingham Citizens on February 24th; a CLASS conference in Birmingham on 26th and the Midlands TUC Regional AGM with Frances O’Grady, TUC General Secretary, as guest speaker on February 28th.