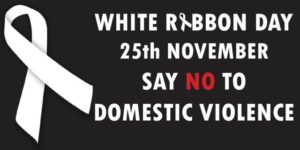 Officers from GMB Sandwell and GMB Birmingham and West Midlands women’s group are proud to champion the White Ribbon campaign against domestic abuse, and along with support from Port Vale FC are selling ribbons to raise funds to suport local charities.

Today is White Ribbon day – A day to make a stand and raise awareness of Domestic abuse.

White Ribbon Day is inspired by The White Ribbon Pledge lead by men who campaign to stop domestic violence against women. Women might be the primary victims of this type of assault, but there is no reason why men can’t take a share of the responsibility in putting an end to it. Clearly, many are committed to doing so.

Domestic violence statistics show that 70% of incidents result in injury and that on average, two women in England and Wales are killed by a partner every week. But what does wearing a white ribbon really mean? It says loud and clear that you will never condone, take part in or remain silent about domestic abuse against women.

Please contact our office if wish to wish to make this pledge. Donations for ribbons are requested at a minimum £1.00, however any donation small or large will help support local groups.

Domestic violence can take many forms, including sexual, emotional, and/or financial, in addition to physically violent abuse.
Every act of violence is wrong and everyone, whether male or female, has the right to a life free of violence.
If you are facing violence in any form you do not have to put up with it.

There is support available. Contact the services below for free confidential advice. They can also direct you to local support services.
Women’s Aid
0808 2000 247