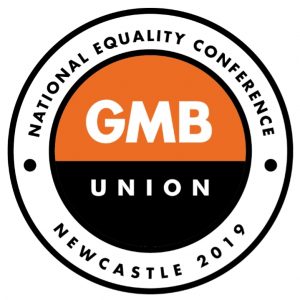 Day 1 of conference started with a welcoming speech from GMB National Equality Forum chair Brian Shaw who outlined the tone of the conference, day 1 would be workshop based and day 2 would focus on motions and elections.

We heard from regions about the good and bad points of Trade Unions as perceived by younger members and what the myths are, as well as reasons why delegates had joined the Union

One of the delegates from North West & Irish region summed the feeling of those in attendance perfectly “GMB helped me when no one else would. I now want to give back and help others” Exactly what our great Union is about, empowering people!

During the workshop regions were asked to design posters to encourage young workers to join and get involved. We are looking forward to seeing the graphics that the communications team will be creating from the initial designs.

It was also announced that during apprenticeship week GMB will be launching a new apprentice membership benefit scheme, operating similar to the NUS scheme whereby members will receive a discount card.

We heard about the great work that has been done by GMB and disabled workers on the Neurodiversity and Dyspraxia toolkits. We also launched GMB and the TUC launched the joint Reasonable Adjustments Passport  which will help many of our members and potential future members.

Updates were given to conference about the Domestic Abuse charter launch in Parliament and the policy document was circulated after we heard from the speakers and a Q&A panel.

I’m pleased that GMB are already in discussion with Sandwell employers to adopt these policies.

We then broke into workshops focusing on Black Workers, Disabled Workers, LGBT+ Workers and bargaining for equality.

Finally before conference was adjourned for the day we heard from Tim Roache, GMB General Secretary, who gave an update on the review of the Equalities department nationally and plans for strand events going forward.

Day 2 started with the ballot result for TUC and Labour Party conference delegates.

We heard throughout the morning, motions on a wide range of subjects relating to equality and as is often the case at the National Equality Conference, there were some very emotional speeches. There were many first time delegates and first time speakers who were truly inspirational and we look forward to seeing the motions passed being driven forward by the National Equality Forum and activists over the next 12 months.