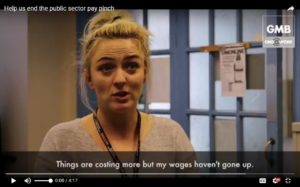 Our vital public sector workers have had thousands pinched with a decade of real terms pay cuts.

Our members have been speaking on video about the impact the cuts are having on themselves and their colleagues.

We won’t stop until we secure the decent pay deals our members need. And we’ll be taking our campaign for fair pay in the public sector across the whole country.Public sector worker? Find out how much you’re having pinched and join the campaign at: www.paypinch.org