This Saturday (6th July 2019) GMB along with sister Trade Unions will be celebrating the Cradley Heath Women Chainmakers Festival. 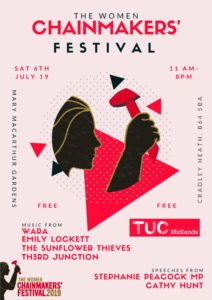 We hope to see as many people as possible at the event and encourage you to attend the GMB stall to have a chat.

You may be wondering what is so special about this local event and why GMB have just passed a motion at Congress to support it nationally.

Sarah James, our branch Equality Officer has written a short piece about the importance of the Women Chainmakers and the comparison between conditions over 100 years later.

At the beginning of the twentieth century 90% of all the chain workshops in England and Wales were situated in and around the Black Country and although they had started to decline, in 1910 there were 3,500 chain makers and two thirds of the workers were women.

The chainmaking women worked for long hours and piece work rates, often with their children alongside them or heavily pregnant hand-hammering chains for domestic use.

Chain making in the Black Country had started to receive attention from the Government in the early 1900’s, the idea being discussed was to regulate wages & improve the lives of workers, but throughout negotiations to establish a better wage the employers complained that higher wages would make them vulnerable to foreign competition and would encourage faster modernisation and would result in job losses.

Sound familiar? This could be any negotiation taking place in any workplace today.

In the spring of 1910 a minimum wage of tuppence ha’penny per hour was proposed. The rate, although a low wage, would double the wage of the women workers was agreed within the nationally organised board. The employers however almost immediately tried to find loopholes in the agreement.

They managed to get a six-month delay, during which they sent managers to get the women to ‘contract out’ of the minimum wage. Many of the women Chainmakers had no formal education, rendering them illiterate and those who refused to sign the forms were told there was no work for them.

On 23 August 1910, the National Federation of Women Workers (NFWW) demanded the minimum wage be paid immediately. The employers refused and the union, led by Mary Macarthur from Glasgow, called a strike for all those women on less than the minimum wage. At a mass meeting of women workers, they all agreed not to sign the form.

The strike was not easy to organise. More than half of the women on strike had not joined the union because the weekly payment of 3d could buy a loaf of bread — food poverty was a real issue for women in 1910, Its shocking that in 2018 we are still faced with this issue.

But tired of working day and night for starvation wages, the women voted to ‘’come out and stay out’’. It was reported at the time that seven hundred women put down their tools.

Mary was media savvy, she knew that using the media of the day she would be able to promote the cause by putting workers stories at the forefront of the struggle, much like the campaigns run by The Trade Union movement today. I’m sure if Mary MacArthur was with us today she would be leading the way in utilising Social Media for the good of our members.

The cause found supporters and donations were received which stopped the workers being starved back to work. Even a big businessman like George Cadbury donated to the fund. Another donor to the fund was the Nobel Prize winning author of The Forsyte Saga, John Galsworthy. He wrote a report on the strike in a chapter of his book of essays ‘’ The Inn of Tranquillity’’. He calls the women. ’the chief guardians of the inherent dignity of man’

Wednesday 19 October 1910 marked the end of the 10-week strike. Small chain making was the first industry to obtain minimum wage legislation, and we should look back on this campaign with pride.

So, what lesson is there for us in the 21st Century? Times have changed and our lives are much better now aren’t they?

108 years after the end of the Chainmakers’ strike where desperately poor and overworked women workers said enough is enough, stood up and took action to improve their lives we now hear the appalling stories of workers conditions at Amazon, not far away in Rugeley, Women in late pregnancy forced to stand for ten hours a day while another told GMB that she suffered a miscarriage.

Women in the 21st Century have swapped one set of chains for another, almost a million people are on zero-hours contracts. Our teachers and teaching assistants are feeding children arriving to school without a meal in their stomach and they are providing sanitary wear enabling girls to attend school.

Mary’s Union the NFWW became part of GMB in 1921 and is part of our family. We have many amazing organisers and activists and we are proud of them all, especially the women continuing the fight for better pay and working conditions up and down the country, in workplaces such as Amazon & ASOS, women being forced to work in appalling conditions at a time when they need support and understanding from their employer.

We’re holding employers to account, when they contract work out to make a quick profit from our Public Services and we are taking on Equal Pay cases within Local Authorities, and nationally GMB is taking on Asda over equal pay so that workers in the stores are paid as well as those working in distribution. 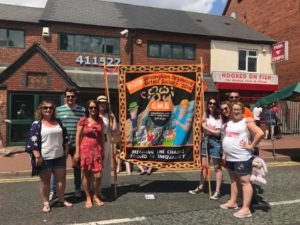 The Chainmakers Festival is so important to ensure that women’s roles in our history are properly understood and valued. For far too long women have been written out of history but we must learn from, and honour the fearless women who paved the way for us to have the rights we have today. As well as all this we must all take responsibility to make sure that our history is no longer hidden and we break the chains forged by inequality.